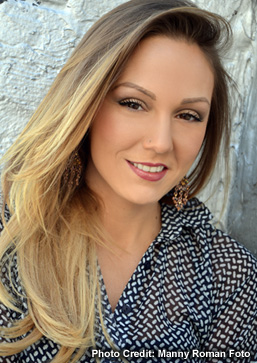 Kristyn Pradas of Pradas Glow, is a renowned Los Angeles based (formerly New York City based) airbrush-tanning artist with over a decade of professional experience. Recognized for her excellent interpersonal relations and precision contouring, she consistently delivers an intimate, customized experience for each of her clients. Driven by her multicultural background and artistic enthusiasm, Pradas was inclined to create custom color blends to suit every hue and skin tone. Pradas carved a unique niche in the beauty community by providing confidence and comfort in creating a convenient tanning experience that caters to the needs of each client. Pradas has become the number one sought after spray tan consultant from Los Angeles to NYC. She is the go to girl for Beauty Editors from world-renowned publications such as Vogue and Allure.

Featured as the favorite tanning specialist on Bravo’s The Real Housewives of New York City, and has also showcased her work on campaigns with Victoria’s Secret, Vince Camuto, True Religion, Lilly Pulitzer, Free People, Topshop and Target to name a few. Pradas continues to reach new milestones while lighting up catwalks worldwide with her natural glow; as seen on the Angels at the Victoria’s Secret Fashion Show 2013, 2014, 2015, 2016, 2017 & 2018.

On-site at a location of your choice

Custom blended color for each client from a light glow to a deep dark tan and everything in between. The Pradas Glow technique includes full body contouring to camouflage imperfections and accentuate your natural beauty

Get your glow going in our Hollywood’s Secret So

End of year SALE on all self tanners and Pro Sunle

Get 25% off your order when you use GLOWINTO23 at

Happy Holidays! Get 15% off your order when you us

Get your glow on this holiday season ⛄️ 15% of

Last day of cyber Sales! Use code THANKYOU at chec

Black Friday Sale Use code THANKYOU at checkout to

Our Cyber sale starts now! Use code THANKYOU at ch

Walking into Thanksgiving week without a care in t

Hollywood’s Secret is our Sol Solution with hues

Ibiza Nights is our Sol Solution that works best o

Customizable shades for all skin tones in mousse f

That Nude Glow ✨ From left to right… @haydenb

#MiamiVibes Sunless Tanner available in Pro and At